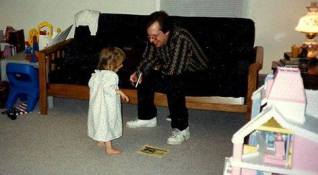 (Dad, showing Baby Me a CD. Nothing much has changed.)

I’m still a little irritated that I listened to songs in 2016 I had discovered in previous years. I think it’s some hidden meaning about expectations or something (there isn’t much glitter in your daily life? not every man I’ll meet will have the dream personality of Chandler Bing?) But that is okay, in a way. Having the same songs play in the background of your life can provide a welcoming accompaniment to new daily happenings. Whatever, I’m sure that I’ll have a lifelong love of the Spice Girls.

69. “Heavy Bells”- J. Roddy Walston & The Business: Ford saw this band live while working a music festival on a station assignment while I was off doing Other Things, back in 2015. One of the biggest music related regrets I have is skipping J Roddy Walston and the Business’ set at this festival. I really loved “Heavy Bells” because it rocked so hard in a time during a dance craze within college radio and the CMJ charts. I loved opening the studio door and cranking this song; it was almost always met with confusion when the (heavy) bells started ringing loudly toward the end of the song.

68. “Girl Loves Me”- David Bowie: I was thinking about writing a post related to Bowie and “Blackstar” on the one year anniversary year of his death, but the truth is, I haven’t been emotionally able to listen to the album enough to warrant a good post. However “Girl Loves Me” was a track I was able to listen to during times of extreme mourning. It was classic Bowie, mixed with a Bowie I had never heard before (did he REALLY just say “fuck?”) It seemed like the track that was the “least” sad; it’s able to stand alone on the emotional scale better than the other tracks for me. It’s almost as if it is completely separate from “Blackstar” as a whole.

67. “Slow Show”- The National: I really love Gossip Girl, okay? This song was featured in an episode where something Really Important happened in which Blair Waldorf’s face was adorned with twinkle lights for an entire scene. The song went incredibly well with the aesthetic!

66. “Head On”- The Jesus & Mary Chain: I haven’t yet clicked “play” on a song while writing these posts, but I just might for this one. “Head On” was the soundtrack to my junior year of college, where I went through an extreme period of change in my life, pretty much for the first time. My boyfriend and I had to become long distance when he had to relocate. There was a significant staff change at work, which was incredibly significant for me, and held an incredible impact.

However, all of the change and confusion was briefly put on hold when I rode in the homecoming parade with the station. Night had just fallen, and I was cruising in our car with some coworkers and my boss/radio mentor/role model. We were driving up and down the hill while classic hits from our music library rang out through the night. As music director, my job was to create a mix CD of classic college radio hits and modern nuggets for the parade. I was sitting next to my boss in the passenger’s seat while she was thumbing through the tracks, and muttering “no” until we got to the last track on the CD, “Head On.” She finally settled on my most recent favorite song as I exhaled a sigh of relief and turned to look outside to see a group of sorority women bouncing down the sidewalk to the Jesus and Mary Chain. It was what I’d like to classify as a Perfect Moment that only happens rarely but is so significant, that you’re able to pull it out of your memory bank with extreme clarity almost three years later.

65. “Jet Fighter”- The Three O’ Clock: I file this band and song under the category, “Songs From Your Dad’s Youth Which Remind You He Will Always Be Cooler Than You.” I’ve been a fan of this tune since childhood and it stands the test of time. It was also a big influence on my personal music taste and the vibe I attempted to capture as a college radio music director. When the Three O’Clock reunited for a TV appearance in 2013, I made my boyfriend stay up late to watch it with me while trying to explain/screech how important the Three O’Clock were to power pop and new wave, and my general being. I think he seemed to Get It.

64. “Hymn For The Dudes”- Mott The Hoople: I tried to get rid of a spider last week while listening to this song. Does that make me holy?

One Saturday Night, Ashley and I came home for a family gathering to find my Dad showing off his latest CD purchases. He excitedly told us Mott The Hoople’s Greatest Hits changed his life as a teenager, after he found it in the cut-out bin at the record store. Ian Hunter and co. became our travel companions for a while on the way to and from Bowling Green, and I began to believe that god ain’t jive.

63. “Oh Diane”- Fleetwood Mac: I’m a huge Stevie/Lindsey era Fleetwood Fan. My go-to Fleetwood Mac records are “Rumours” and “Tusk”, and I tend to pass over “Mirage” which has the glittery “Gypsy” and the Buckingham fueled “Hold Me.” When “Mirage” was re-released earlier last year, I got into it and really gravitated toward “Oh Diane”, a Lindsey vocal track. There’s something about Lindsey Buckingham that screams POP MUSIC to me.

62. “Joey”- Concrete Blonde: “Joey” was always a song that everyone around me knew but I didn’t for a very long time. Once I discovered it through a College Radio Day weekend my junior year, I became pretty much inseparable from this tune. I just really wanted to tell someone named Joey that I wasn’t angry anymore.

I guess it’s always easy to hang onto the songs that remind you of incredibly happy times! “Joey” reminds me of a period of transitions which were aided by memorable life moments. It’s also insanely catchy!

61. “Get Along (Diamond Ring)”- Dressy Bessy: Sometimes you discover music from unlikely sources. There was a period of time when I was younger when I went along with my Dad as he jammed with musician friends. His pals were always really fun and interesting and knew More About Everything, and I couldn’t wait to be in the middle of it all.

I remember one of his pals was really into this band called Dressy Bessy. They had a wacky name, and looked really whimsical in their publicity photos he had laying everywhere. I don’t remember hearing any of their music, but the name Dressy Bessy really stuck in my ten-year old brain. Last fall, I was “reunited” with the Weird Band, through college radio when Dressy Bessy released a new record. I’m a sucker for a Bouncy and Fun song that reminds me of chewing bubble gum and The Beach Boys (although I don’t know why I would chew The Beach Boys.)

60. “Vision of Love”- Mariah Carey: Mimi; the force who attempted to hold 2016 together at the end of the year as Impending Doom attempted to ruin us, and won. She also held me together throughout some tough times in 2016 by giving me the power to pretend like I could sing my way through the darkness. What a Fantasy.

Hi, how are you? I am a freelance writer and blogger who specializes in popular culture content. Contact me at taylor.m.hodgkins@gmail.com for more information! View all posts by Taylor Hodgkins